He was a builder from London; he and his family lived at Hastings House, 8 All Saints Street, built after the original Hastings House was demolished in 1877.

Abstract of title of the Hastings House Estate held by East Sussex Record Office
Reference: NB/4/2/9
On 31 December 1876 the trustees sold Hastings House (as shown on plan) to William Henry Goodwin of Hastings, gent.  Goodwin and Henry Chapman of Hastings, builder, developed the site as Old Humphrey Avenue, numbers 1 and 2, 36 and 37 of which fronted onto All Saints Street, and 17-23 of which fronted onto Tackleway.

Coventry Patmore wrote: “A late Catholic Bishop of Southwark sold Hastings House with an acre of garden on the East Hill which had been left to him by the late Duchess of Leeds for an orphanage, to a London speculator, Henry Chapman, who pulled down the good old house which should have been sacred if only because it had been the abode at different times of Lord Byron and the Duke of Wellington, and erected two rows of stucco tenements which are the only absolute stain upon the beauty of the charming old town”

The stucco tenements referred to is Old Humphrey Avenue.

Sussex Advertiser - Tuesday 19 February 1878,
ADJOURNED. Henry Chapman, builder, Hastings House, Saints, was summoned for using water for building purposes, the property' the Urban Sanitary Authority. Defendant asked for an adjournment, but C. Davenport Jones (who prosecuted on behalf of the Urban sanitary Authority) objected.  The application was acceded to, the further hearing of the case being adjourned to Thursday next, to enable the defendant to get a solicitor defend him, pleaded not guilty, and stated that the summons had only been served upon him the previous day.

Sussex Advertiser - Tuesday 26 February 1878
Mr Jones also obtained leave to withdraw the summons against Mr Hy. Chapman, of Hastings House Estate, All Saints' street, on behalf of the Urban Sanitary Authority, as the defendant had made ample compensation with the Authority for the damage sustained by them, and also entered into explanations upon the matter, and expressed his regret at the occurrence.

13th October 1883 - The Hughenden Hall opened at 97 All Saints Street.  This was an alcohol-free public hall, meeting place and soup kitchen, built by wealthy local builder Henry Chapman for the poor people of the Old Town.

Sussex Agricultural Express - Saturday 03 May 1890
CHAPMAN.—On the 24th[?] April, at Hastings House, All Saints-street, Hastings, the wife of Henry Chapman, of a daughter.

After his death two of his sons “Chapman Brothers” carried on the leasing business Henry had started, with their address as Hastings House. 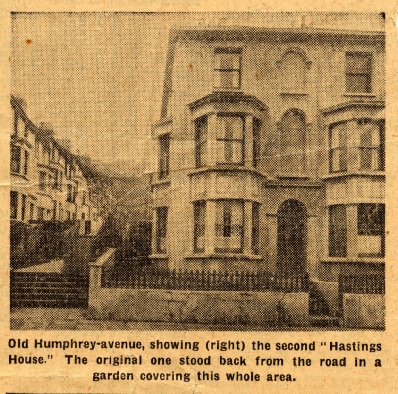